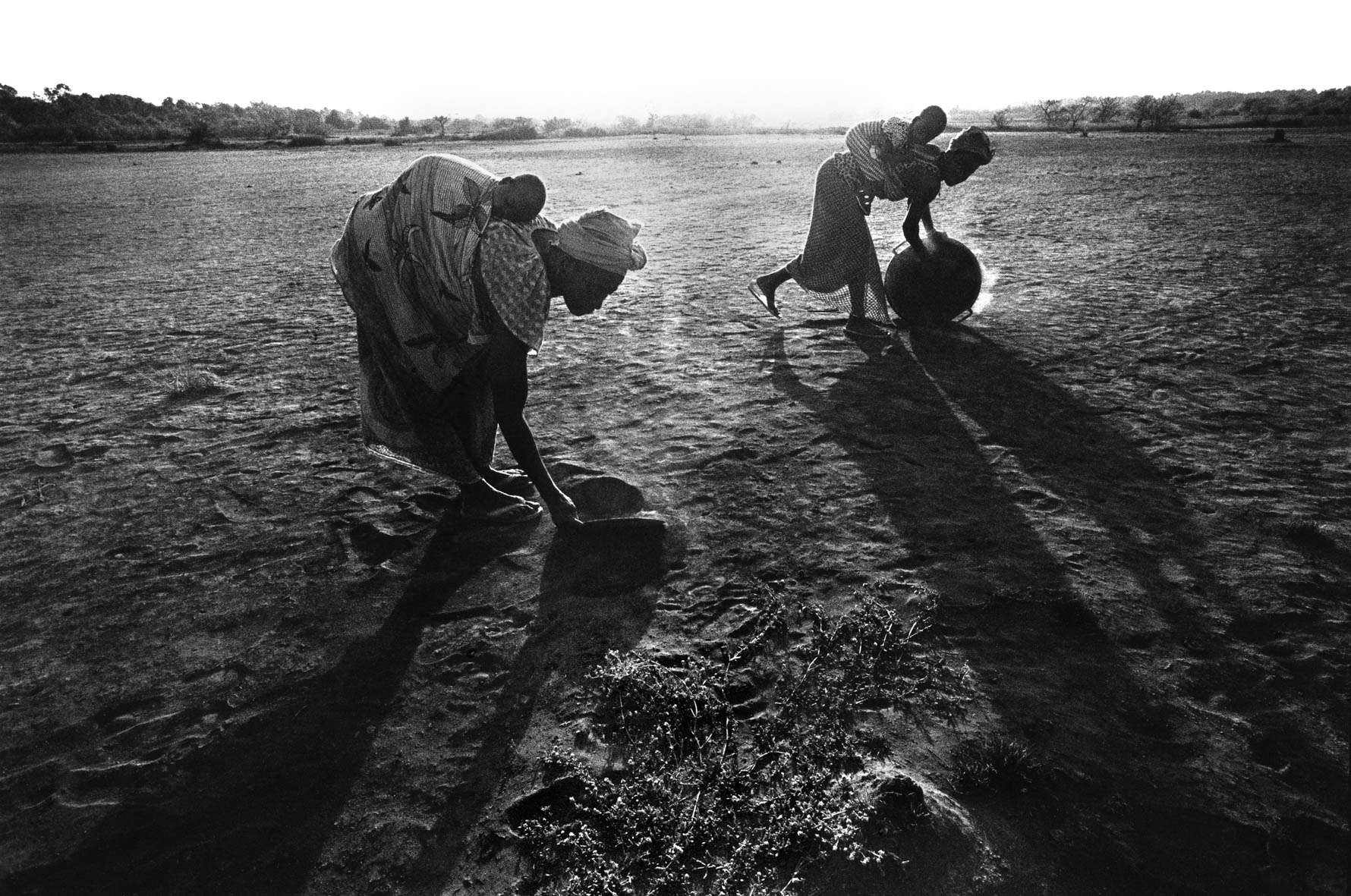 Guinea-Bissau, not even half the size of Scotland, on the west coast of Africa. Independent from Portugal since 1974 and ever since, torn apart by internal political disputes that brought the country close to bankruptcy. Abounding in water with mangrove forest along the coast and a couple of bigger rivers that run from the African hinterland to the Atlantic Ocean.

With a shaky ferryboat we cross the River Cacheu near the small town of Farim. Dew is falling over the river. On the other shore, women with pans full of salt wait patiently to cross.

The women of Guinea-Bissau, they keep the country going. They haul water for the vegetable gardens and sell the harvest at the market. One hour up to the ferry, one hour down. They cook and take care of the children. And the men of Guinea? They only seem to stand about, engaged in some unclear business, praying and waiting in the shadow for the cooler afternoon.

We get a lift in an open truck. On the outer marches of the river, groups of women and children are scraping silt from the surface. “What are these people doing?”, we ask our guide. “The silt has a high contents of salt”, he anwers. Salt? Here? 150 kilometres inland? The outer marches turn out to be the former bolanhas, rice fields that were irrigated, in those days, with fresh water from the river. But, because less and less fresh water ran down from inland, the salty waters from the ocean pressed onwards. Consequently, the rice fields disappeared and the main source of income was lost.

But, the inventive women of the village with the strange name of ‘K3 ‘ made a virtue of necessity: the silt is carried home, a 20 minutes walk. Then they filter it with water from a 15 metre deep well, dug by them. The residue is then boiled in huge, flat, metal pans, made from material left behind by the Portuguese colonial army. Each boiling session produces around six kilo of high quality salt.

The village ‘K3’ is famous in the whole country. In former days, it accommodated important army barracks of the Portuguese (at three kilometres from Farim, hence K3!). Alapdji Fode Mai Touré is the Homem Grande, the traditional chief. At least 90 years old. Fluent in Arabic. He is in session with the elderly men on the veranda of his house. Touré is a legendary figure and tells: how his tabanka, village, opposed the Portuguese, never paid their taxes and supplied the guerilla fighters against the colonial regime with shelter and food. This resistance had its price: 250 men were deported and never returned.

Under the leadership of Djombo Fode Touré (the daughter of the Homem Grande, the religious local leader), the women of ‘K3’ organized themselves in an Asssociação de Sal, an association which made them a corporate body. In the capital of Bissau, Djombo managed to get hold of some funds from a development organization and used those well in the purchase of a machine that adds iodine to the salt. Essential to prevent the much feared crop disease.

Nowadays, the association produces yearly around 5000 kilos of salt that is very popular in the markets of Bissau. And so, after the disaster of the destroyed rice cultivation, about 25 families have found a very reasonable source of income. “Do not count on others, simply trust your own strength”, Djombo told us. The women of Guinea, they keep the country going.