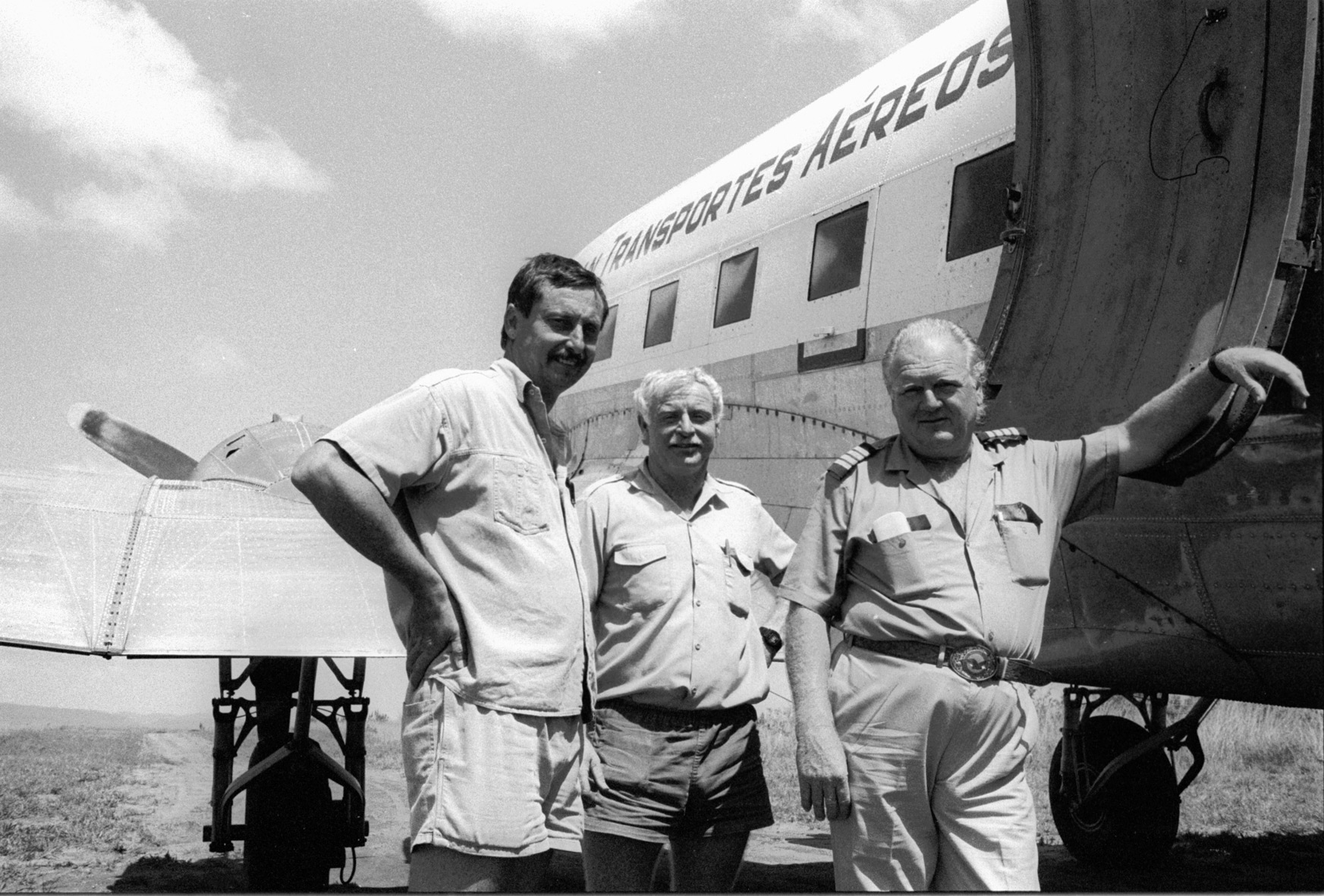 For years the air charter company Scan Air provided flights for the aid organisation that I worked for. This was in the early nineties. Mozambique had been plagued by civil war for decades. Transport by road was often difficult – if not impossible – because of the many attacks by the anti-government rebels. And we really needed transport, because for years we had been responsible for keeping more than 100.000 refugees alive. Waiting for better times, or rather, peace.

Scan Air got its name from Scandinavia, and in particular from Sweden, where Oscar Hermansson was born. A huge guy with a large round beer belly, and as blond as a Scandinavian can be. With a skin which turned bright red in the first ray of sun. Oscar was an exceptional aircraft engineer and a remarkable pilot.

Compared to the risks of travelling over land, air travel seemed relatively safe even though there were times that the smaller aeroplanes simply crashed because they had not been properly maintained or because they had lost their way and with a spluttering tank had to make an emergency landing somewhere in the immense bushlands.

But this was not the case with Scan Air. Oscar had two mechanics who worked for his rapidly expanding, reliable fleet and had also a fully manned maintenance repair station in Swaziland. Cessna´s, Beechcrafts and two freight aircraft – DC-3s (Dakotas, or commonly referred to as ‘Daks’), impressive machines (“if it looks good, it flies good”). Felicity, Oscar’s wife, with the same round curves as the Daks, was the Managing Director of Scan Air and with her strong South-African, farm-girl accent, she rang up all southern Africa looking for new clients. Felicity and Oscar bought the oldest flying Dakota of three from Ethiopian Airlines in 1991; built in the Douglas aircraft plant in 1938. With the unmistakable sound of a Pratt & Whitney-engine on each of its wings: deep and resonant. A sound that the Dutch war generation still remembers well from the time when the food was dropped around the time of the liberation. Dakota spare parts are still available and so Oscar and his mechanics overhauled the ‘new’ acquisition to the highest quality requirements.

Scan Air carried out hundreds of flights, with cargos of maize, oil, flour and sugar. With tents, medicine, with spare parts, petrol and generators. Before sunrise the Dakota was loaded up at the Chimoio airport and at the first reddish-blue rays of daybreak Oscar, his two co-pilots John Murphy and John Tristan, chugged to the runway, lifted off with full throttle and disappeared in a steep curve in the direction of Espungabera, Machaze, Gorongosa or Mungari. The word landing strip could hardly apply to those places. They were more open spaces, just long enough to come to a standstill before a row of huts. First, they flew a circle four meters above the ground to scatter the people and the goats who were constantly walking all around and then they landed. Over holes, trenches, and rubbish. With the right hand engine kept running to ensure a a re-start, the cargo was unloaded in a quarter of an hour by the local people. The last bag had not been taken out when Oscar was starting up, the door still open, eager to get on the way to the home base for a new load. With no cargo, it was extra fun flying the Dakota and Oscar had a ball flying in between the baobab trees (“the lower you fly, the more difficult it is for them to fire at you.”). Without any lunch they flew on till the daylight had completely disappeared and with any luck they were able to make four, five trips a day.

Guro was a village which had – within a short time – seen 25.000 refugees stream in as the war front became closer. Guro needed provisions and so we decided to sound out the situation with Oscar and his Cessna. But the runway turned out to be in bad repair and Oscar decided to land on the tarmac road. It ran quite steeply up towards the centre of the village and turned out to be just long enough to come to a halt right in front of the local government offices. The look of panic on the face of the mayor was one in a thousand… Departing with the Cessna was more precarious, because at the end of the tarmac there was a bridge with railings on both sides which were higher than the wings. At full throttle we stormed up to the bridge, but our flying Swede had calculated correctly and a few metres from the bridge railing he lifted his machine off the ground.

It was decided to hire the villagers in to repair the airstrip. They did not want any money – what would they do with it anyway – what they really wanted was food.  And so Guro ‘airport’ was ready for the Dakota within two weeks.

There was an increasing amount of transport needed for aid materials because the war was still spreading out, and Scan Air did excellent business. More flights, more aeroplanes. The tempo increased and to save time there was more and more cargo loaded on to one flight.

Then, one day in November 1993, I was called by the director of the Chimoio airport: the Dakota had not come back from a flight in the northern province of Tete. Two days, three days, no sign of the Dakota. On the third day the news came. After a full day’s walk with a fractured leg and collar-bone, through the savanna swarming with wildlife, with no food or drink for three days, John Murphy had collapsed, exhausted, close to a village on borders of the river Zambezi and had been taken to the police by the villagers. Once he had recovered he told his story. The Dakota had been loaded and to maximum capacity and on route to Muturara, they lost an engine, a common occurrence that plagued their fleet. Being in love with with his aircraft and not wishing to ditch his Dak on a short field in the middle of no where, Oscar made the fatal decision to turn back and try to make it home. In the swelteringly hot weather and fully loaded, the Dak lost valuable altitude minute by minute. Like a madman, in midair, John Murphy had begun to throw 50 kg bags of maize out of the plane, but realized that it was too late when through the open door he saw the tops of the baobab trees zoom past.

There had been a huge bang and the crash had lasted for ever, but he had survived because sacks of maize had slid over him so that the aluminium which was flying around could not hit him. The army sent a helicopter to the scene of the crash which they found quite quickly from the  directions John gave. It must have been a gruesome sight because Oscar had been flung out of the cockpit, which had been wrenched open and he was hanging over a propeller, dead. John was still fastened into his seat belt but died during the second day after the crash, following when then John Murpy was forced to leave them and save himself. Three days in 45 degrees Centigrade meant that they were unrecognizable. The built-in safe with the money and papers had been robbed and was empty.

On the fourth day I was rung by the hospital director. Did I know the pilots, and if so, could I identify them? The mortuary of the hospital was itself awful. The airconditioning had not been working for years, the mosquito netting on the windows was rusted and broken, so that inside it was not only stifling hot, but because of the swarms of flies you could hardly see where you were walking. Through a little hallway, a room with corpses, to another little room lit by a solitary bulb. There lay two bodies, more like balloons in fact, swollen up with decay and covered with thick layers of flies. The stink was awful and in a corner I vomited out my revulsion. With a cloth in front of my mouth, it was up to me to identify the bodies. But it was impossible for me to distinguish between the two men. Oscar was, as I said, blond, heavily-built and tall; John was a smaller build, with a beard, slim and sun-tanned. But body parts were missing and the wounds which they had on their faces were so numerous that I could give no definite answer. All at once it came to me how I could tell Oscar and John apart: Oscar always wore long safari trousers and John was always dressed in khaki shorts. And so was I able to do what was expected of me.

The same day Oscar’s wife Felicity and son Lyndon, arrived in their Cessna 402 with their pilot Frank Helpers and two undertakers from a South African funeral parlour. They were to prepare the bodies for export, embalm and lay in zinc coffins. In my office they changed their clothes and then made their way to the hospital. A quarter of an hour later they were back. They had never seen such a mess and they asked me if I had any plastic material. As a conscientious Dutchman, equipped with the necessary supplies, I had still got two rolls of grey rubbish bags which I had brought from a Dutch supermarket. The men cut open the rubbish bags, wrapped them around themselves and stuck them together with tape. After working six hours solidly, the task was finished around midnight  and they put their clothes on again. Despite showering and scrubbing themselves three times, they still stank to high heaven and it was more than a year before the smell of the corpses left my room.

The next day, after a short but emotional ceremony we drove to the airport with the two coffins on a truck and gently slid Oscar and John Tristan into their Cessna, which flew them both to Johannesburg for a burial service and cremation. It was reported that pilots, engineers and charter operators from all over southern Africa, convened at the service to bid them farewell.

With thanks to Lyndon Hermansson